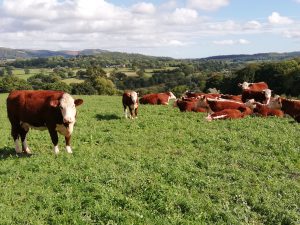 Since November 2017, John Richmond has been the Resident Stockman at Cheddarmarsh Farm, the home of Cato Poll Herefords. Having previously run his own herd of Herefords in Northern Ireland, he was well qualified to take on the running of Jonathan Moorhouse’s established and successful herd in Somerset.

John set up home with his partner Gill in the farmhouse at Cheddarmarsh, and has settled in quickly.  He is responsible for the day to day running of the herd and has positioned himself as a vital member of the Cato Poll team.  He has had a busy spring, bringing into the world 20 beautiful heifers, that are all doing well.

“We are very grateful for John’s aptitude and enthusiasm since he has joined us,” said Jonathan Moorhouse, owner of Cato Poll Herefords.  “He has made his mark on the herd very rapidly and we are pleased with the way it is going.  Since becoming Hereford Breed President in January 2018, it has been extremely important that I can leave someone in charge in Somerset as I travel around the UK at shows and events, and I am extremely happy to leave John at the helm.”