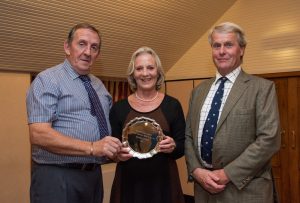 The award, judged in August 2018 in the South West Hereford Breeders Association Herd Competition, selected Cato Poll as the overall winner of entrants from the South West region.

The competition was judged by Richard Mann of Spinney Herefords who visited the south west herds with his wife Joanna, and saw Herefords in different conditions and landscapes across the region who were “all a credit to the breed”.

“This is a really great achievement for us to win Best Herd in the South West for 2018,” said Jonathan Moorhouse, owner of Cato Poll Herefords, who received the award alongside his wife Rosemary at the Hereford Cattle Society’s annual awards dinner.  “We must give credit to our stockman John Richmond, who only arrived at the beginning of November 2017 and wins us the accolade of ‘Best Herd in the South West’ the following August!”